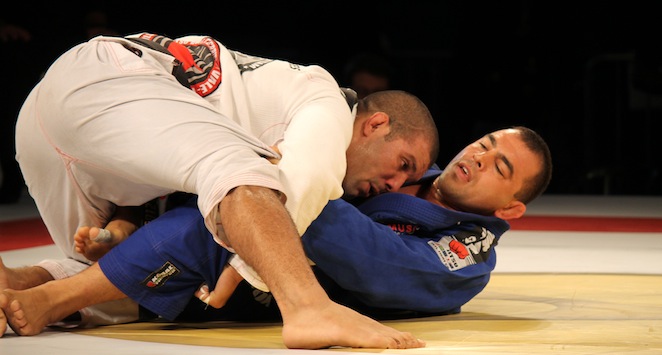 Rodolfo’s Passing is a hybrid of two Philosophies

Rodolfo makes an excellent subject in guard passing because of his versatility. Lighter weights often display more of the “agility/diversion” style of passes like drags and toreandos while heavier weights pass more in the smashing/pressure realm. Rodolfo does both and thus a study on him is a good overview of the two philosophies. We check out his pressure/smash passing in this article.

Leverage and Pressure are the Foundation of Half Guard Passing

Half guard was in itself an innovation to traditional BJJ. By opening up the closed guard and using the half guard, the guarder could now access a whole new branch of offensive possibilities. Lying sideways and being able to push away with the hands as well as two big shin bones meant a passer would need a lot of effort to pass.

The key really is to find a way to flatten the half guarder. Once flat on his back, a guarder is vulnerable to getting “stretched out” and losing the ability to put his shins in the way of the passer. Of all the half guard passes, crossfaced based ones are the most lethal as once you can control the head, much like in wrestling, you can dictate where the body moves. Turning the face away from the direction the guarder wants to “turn in” to is key. If this is achieved, you can flatten him out much more easily.

Rodolfo will gun for the crossface any chance he gets. Whether it comes off his kneeslide, toreado/drag/Xpass or a scramble, if it’s there he will take it. He knows that once he can lock this on he can start grinding out a series of passes till he wears the guarder out. Amazingly he has faced Bernado Faria , an expert halfguard/DHG player multiple times and has managed to smash him with the crossface everytime. The pressure he can bring is second to none and if Rodolfo can get his favorite position, which is to be semi-mounted high up in someone’s halfguard with a crossface on, his pass rate is practically 100%. Roldolfo will take his time, working his way up the body, from over/under, to a halfguard, to a semi mount. If he gets frustrated he can retreat “down” to a longstep or a kneeslide till he gets in position to climb up high again.

Key to this ability to keep putting pressure on the guarder is this punching for the underhook whenever he can. Rodolfo likes to set this up when the opponent tries to grab Rodolfo’s non-crossfacing hand which is pushing on the knee. He punches through and now has underhook and crossface. From here he can really start cranking to pass or he can switch to a kneeslide.

*underhook punch through from the crossface

No big secrets here, crossfacing/halfguard passes are (important) fundamentals BJJ players of all levels must know. There are a multitude of crossface/halfguard passes online so please do check those out. In the meantime, check out the video on how Rodolfo uses crossfacing to pass the toughest guards at the elite level.